A special spacer bar for IGUs, usually made from stainless steel or synthetic material. Improves the insulating power compared to the usual aluminium or steel which lessens the thermal bridge. 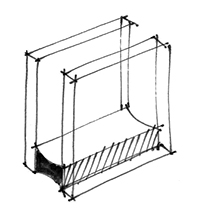 A soft strip of synthetic rubber or plastic on the rebates or in the grooves of the frame or the sash. When closing the window the material compresses and any unevenness in sash or frame is smoothed out. Secures against draught and water penetration. Also called sealant strip. 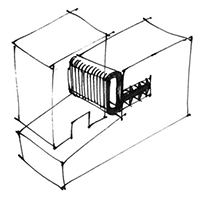 A large circular or semi-circular window in which the tracery radiates from the centre. A variety of the rose window. Also called fanlight. 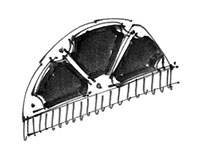 The word originates from the Old Norse ‘vindauga. ‘Vind’ meant roof - where the earliest windows were placed - and ‘auga’– meant eye or opening. A window is an opening that allows the passage of daylight into a building. By opening and closing the window you ensure a good air change and you can control the temperature in the room. The window also provides a view out and contact with the surrounding area. In special cases it also works as a fire escape window or rescue exit. Through history the window has had many shapes defined by capacity of craftsmen and technology, performance and energy demands and aesthetic ideals.

Usually a window is composed of a top frame, two side pieces and a bottom frame/sill. The opening may be divided up by transom and mullion. Between those are the sashes or casements, which again can be divided up by muntin/glazing bars keeping the panes in place. For several millenniums houses have had embrasures, however, in Europe the first windows with panes were introduced around 1100. 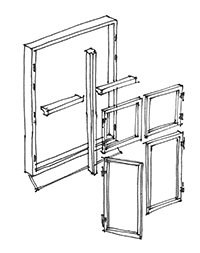 A plate covering the construction of the house from the bottom frame to the inside of the wall. The plate on which the potted plants are placed in the window. Also called sill or cill. 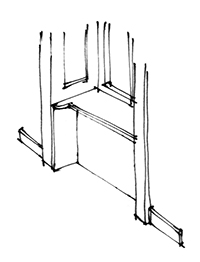