Using brightly coloured glass in windows lent a dramatic, almost divine effect to dark church interiors during daylight hours. Similarly, painted and coloured glass was used to decorate churches and to lay mosaics that illustrated stories from the Bible.

Coloured glass was made by adding different metal oxides to the glass batch during production. Naturally occurring iron oxide lends a green tint to even clear glass; thus, the concentration of iron oxide is significant for the intensity of the green tint. Chromium came to the attention of the West in the mid 1700s, and was later used to achieve green glass.

Blue glass could be achieved by the addition of large quantities of natron or with cobalt, very small concentrations of which (between 0.025 to 0.1%) yield a deep blue. There are outstanding examples of cobalt blue in the Sainte-Chapelle in Paris, which was built in the mid-1200s. The addition of sulphur can intensify the effect, whilst a 2-3% concentration of copper oxide produces a turquoise hue. Various concentrations of nickel can yield blue, violet or black glass. Red glass can be achieved with the addition of copper or small amounts of metallic gold, and silver nitrate can produce yellow nuances.

In the Middle Ages it became common to paint glass with decorative patterns and detailed figures. The special glass paints used contained lead and copper, and in the 13th century also silver nitrate, added in various quantities to achieve a range of nuances. They were then fixed by firing in an oven. 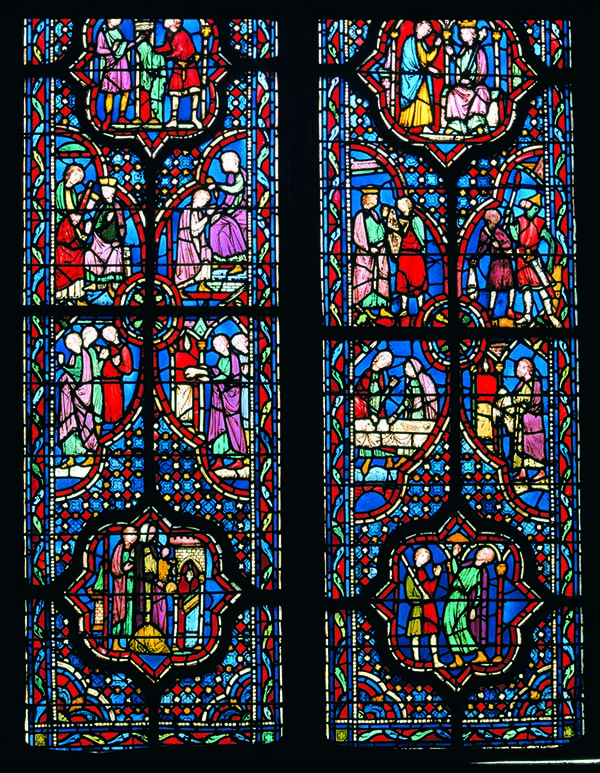