The method for cast rolling mirrored glass was developed in the mid-1600s by the French glazier Louis de Nehou.

Perfected over time, the technique involved pouring molten glass on a large, sand-covered casting table on which there was a frame whose height corresponded to the thickness of the glass. The glass was rolled with large rollers to assure uniform thickness, then ground with sand and polished with felt pads on both sides to render a completely smooth surface.

Introduction of the roll and polish technique was extremely expensive and required enormous initial investments. Nonetheless, it enabled the royal French glass works to deliver mirrored glass for the Hall of Mirrors at Versailles in 1678-1684. The Hall became a benchmark for architecture and the use of large window panels and mirrors prior to the classic Baroque style.

In 1688, Louis de Nehou received exclusive rights of the technique for the production of mirrored glass measuring at least 60 x 40 inches, or ca. 1.5 metres x 1 metre. Later the technique was further developed, thus paving the way for a leap in the production of large dimension cast mirrored glass. In 1693, the French glass works set up together in Saint-Gobain with Louis de Nehou as the director.

Saint-Gobain specialised in cast mirrors, and in 1699 the Englishman Martin Lister reported seeing mirrors measuring 2.23 x 1.2 metres with a thickness of 1.27 cm (88 x 48 inches, with a thickness of ½ inch). He believed it impossible to manufacture mirrors in such large dimensions using the cylinder glass technique. Cast rolled glass was groundbreaking, and the elaborated technique was used until the 1920s. 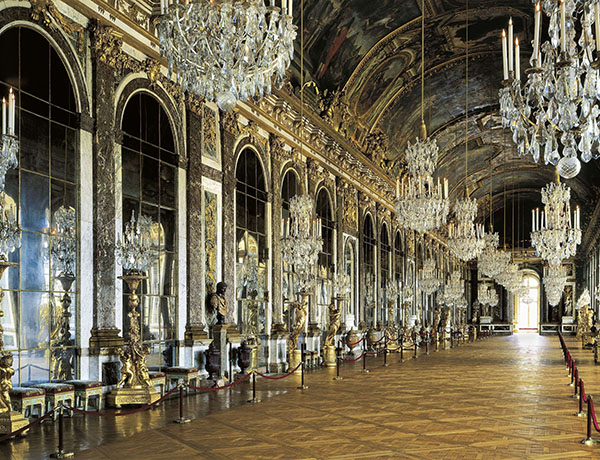