Mouth-blown cylinder sheet glass for windows can be traced back to the Roman Empire and the 3rd and 4th centuries. However, it did not become widespread in Europe until around the years 800 to 1000, when monks rediscovered and refined the process.

The production of cylinder glass is a multi-stage process. First, a mass of molten glass is gathered on the end of a blowpipe. The glassmaker uses the pipe to blow the mass into a balloon. Blowing continues until the balloon gets bigger and bigger and longer and longer. To end up with as large a sheet of glass as possible, the cylinder is swung in a trench, and eventually, it takes on the form of an elongated cylinder. When the cylinder has reached the required size, it is opened, first at one end – and then the other – by breaking off the blowpipe. The cylinder is then scored with a blade and opened lengthways. Finally, the opened cylinder is reheated a final time, allowing the cylinder to unroll and form a flat sheet of glass that can then be cut to form panes.

A mouth-blown glass cylinder could be up to 1.7 metres long – depending on the glass blower’s lung capacity. In around 1904, a new process arrived by which cylinder glass could be blown using compressed air. It was now possible to produce glass cylinders up to 12 metres long. 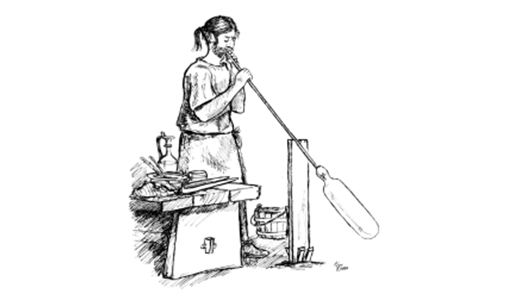